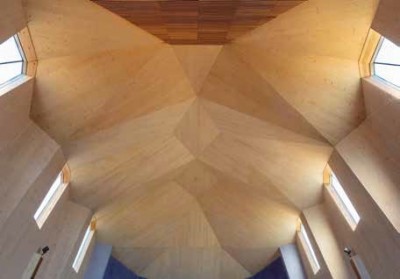 Inspired by the great cathedral builders, where the design of the interior is derived from a fusion of ecclesiastical function and structural efficiency, the project team wanted to capture these essential qualities and give them a contemporary interpretation. The early design development was driven by structural explorations with the architecture then essentially derived from the structural design. The acoustic performance of the chapel was also of paramount importance for the client both in terms of music and the spoken word.

The concept was to create architecture that had no historical references to earlier religious buildings and had to be accessible to all regardless of their faith. The visible grade CLT structure is left exposed internally and takes the form of an innovative ‘folding panel construction’ – reminiscent of the stone vaulting found in historic cathedrals.
CLT created new possibilities for the architecture and planning involved, with ZÜBLIN Timber responsible for the planning, manufacture, delivery and assembly of the CLT and glulam elements, as well as the complex steel components.

The engineers wanted to create a pure, elegant folded plate form internally, where walls flowed into the ceiling with no downstand beams, a view subsequently shared by the client. As the CLT panels would be left exposed and thereby forming an integral part of the chapel aesthetic, the challenge was to ensure there were no visible connection details. The team explored how CLT could be used as ‘folded plates’ with structural efficiency and elegance obtained by a form geometry which also creates a lively dynamic feel as well as a timeless stillness.

The creative process started from the early conceptual development of the folded plate geometries which worked structurally, architecturally and could be readily fabricated from standard CLT panel sizes. The structural folded plates are elegantly proportioned and allow the smooth flow of forces from the vaulted ceiling to the ground. Within the chapel space, no two planes meet at right angles and therefore required an
acute attention to tolerance and detail. Whilst being efficient structurally, vaulted roofs can be difficult to build. Initially a birdcage scaffold was proposed which would remove the programme and cost benefits of a prefabricated structure. ZÜBLIN Timber recommended the installation of temporary timber props to the head of the glulam columns and down to the adjacent flat roofs, creating supported the CLT panels during
construction.

Stroud Chapel has a 39% reduction in embodied energy compared to the current baseline, not taking sequestered carbon into account which would improve this figure still further. This reduction was achieved by using of sustainably sourced engineered timber as the primary structure and from minimising concrete elements in the substructure through use of a piled slab, negating pile caps and ground beams.
The embodied carbon footprint of the structure is 294 kg CO2e/m2, calculated using the ‘Inventory of Carbon and Energy’, manufacturer information and the H\B:ERT tool, excluding sequestered carbon. The use of CLT to create an airtight structure will further reduce ongoing carbon emissions together with energy and maintenance costs for the lifetime of the building.
Despite the 3D complexity of the folded plate walls and roof, the erection of the superstructure took eight weeks, reducing the impact on the local community. A major but simple innovation was the placing of glulam stiffening ribs above the CLT panels along the fold lines which gave the major benefit of concealing connections, stiffening the panels and acting as permanent formwork. The combination of the CLT panels and glulam ribs allowed for the innovative use of two main load paths.
Firstly, the predominant load path is an arch spanning 17.5m in the long axis of the chapel, formed by the folded nature of the 120mm thick CLT panels, with the lateral thrust resisted in the chapel walls. As walls are much stiffer in-plane than out-of-plane and the chapel is oval, it was found that this was the optimum path for gravitational loads. Studies have showed that adding a ring beam around the top of the walls helped increase this effect.

Secondly, the concealed, maximum, 300mm deep ribs act as a framed structure, working compositely as inverted T-beams with the CLT panels. The panels span in bending and shear between the ribs, as a more traditional roof structure would. Advanced analytical techniques were pioneered by the structural engineer Corbett & Tasker, using a finite element (FE) stiffness matrix utilising in-plane and out-of-plane bending, shear and axial forces, reflecting the orthotropic nature of the panels. This allowed ZÜBLIN Timber to creatively use the two distinct load paths to justify the form of the roof and slim down the structure developed at scheme design stage.
The construction cost for the chapel, ancillary spaces, foyer link with the new community hall and external landscaping was delivered on time and to budget. The total of £1.96million was within the budget advised by the cost consultants and was seen by the client as good value for money. The building has been warmly received by the congregation and has attracted interest both locally and nationally.
Reverend Tom Ravetz, leader of the Christian Community in the UK said: “The impression of the space is one of breath-taking beauty and simplicity. I am sure that it will be a wonderful space for worship.”