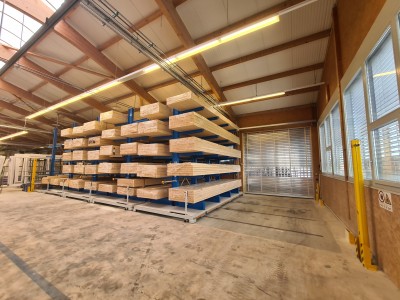 A new mobile racking system from OHRA enables storage capacities for squared timber with only a very small additional space requirement. Four double-sided cantilever racks mounted on mobile stands make it possible to gain storage space while at the same time saving on transport routes. The system is controlled by radio, for example from the forklift truck, or alternatively manually on the transfer carriages. The radio remote control also enables special functions such as positioning the racks for manual order picking or automatically releasing the passage to a warehouse door after a certain time without movement. In addition, the remote control of the system has been expanded so that it can also be used to operate four independent warehouse doors.

The mobile racking system consists of a cantilever rack fixed to the floor and four double-sided racks mounted on transfer carriages. By moving the carriages to form a compact storage block, only one racking aisle is ever open for operation with a four-way forklift – so space utilisation is very high. The four mobile racks are 6.4m long and offer a maximum storage height of five metres on five racking levels. Each transfer carriage can be loaded with over 39 tonnes.

The system is operated via two radio controls or manually on the transfer carriages. Since the more than 16m-long travel path of the racks crosses a passageway to a neighbouring warehouse, an additional button was installed on the warehouse door to open the corresponding racking aisle. Furthermore, the control system was programmed in such a way that the racking automatically clears the door aisle after ten minutes without movement. The control of the racking system also enables the control of a total of four doors – so the forklift driver only needs one remote control with which he can operate both the racking and the doors. The racking can also be moved into a picking position via the control system. The racking system offers both the required increase in storage capacity and an overall significantly more efficient and convenient timber picking.