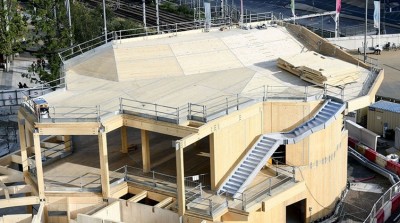 The Queen Elizabeth Olympic Park became a hub for regeneration when preparation for the London 2012 Olympic Games began in 2008. Now, a decade and two Olympic Games later, the area is still developing into one of the capital’s biggest residential and commercial hubs. The International Quarter London (IQL) by Lendlease and London Continental Railways (LCR) is a vast commercial, retail and office space project, amounting to a total contract value of £2.4bn. Both retail and residential aspects are integrated across the hub of regeneration in Stratford.

Lendlease has a long-standing history here and acted as the Olympic Village contractor before the 2012 games.

The area has undergone plenty of regeneration in recent years. New developments in the area include buildings for BBC, Sadler’s Wells, the V&A and London College of Fashion, located in the culture and education district of Stratford in East Bank, on a development site across the railway lines to the west of IQL.

On the International Quarter Site specifically, IQL has been busy building head offices for the Financial Conduct Authority, Transport for London, the British Council and Cancer Research UK.

The events pavilion visited by Construction News will house the Queen Elizabeth Olympic Park visitor centre, two restaurants, a café and a rooftop terrace.
The two-storey IQL Pavilion is set to be the centrepiece of the entire development and will act as the main thoroughfare to link the IQL's new homes, offices and retail outlets once complete.

When CN visits the pavilion, nestled between the Westfield shopping centre and the Olympics Aquatic Centre, there are no immediate signs of a construction site.
And there is no hammering, sawing or drilling either; in fact, there’s hardly any noise at all besides the busy chatter of mid-week shoppers and tourists.

If you look very closely though, you might spot the hoarding – though it looks more like an instagrammable wall of murals and funky artwork – and if you peak over it, you can just about see the arm of a crane.

Otherwise, this project is hidden in plain sight, on top of the Stratford Docklands Light Railway (DLR) tunnel.

Behind the colourful hoarding there is no hidden bustling site filled with workers and machinery – instead, there are just enough workers onsite to count on one hand.
The reason that the site is so quiet is because it is primarily being constructed using pre-fabricated timber.

“It’s a very quiet construction site, it’s like someone building some Lego behind you,” says IQL project director Andrew Tobin, in his thick Australian accent.
He explains that Lendlease used the timber due to the need to build on top of the DLR tunnel.

“There isn’t a lot of timber construction around, but it's something that we are looking at doing a lot more of," Mr Tobin explains. "Because it’s over the top of the tunnel, we needed [a material] that was much lighter, with smaller footings and foundations.

“There are quite a few restraints working around railway lines, but the beauty of what we’re doing is that, because it's pre-fabricated, there are less man-hours and therefore there is less opportunity for something to go wrong.

From Lendlease’s office in Stratford, overlooking the Pavilion and the other IQL developments, the wooden structure looks dwarfed in comparison to the towering office blocks around it.

"There isn’t a lot of timber construction around, but it's something we are looking at doing a lot more of. Because it’s over the top of the tunnel, we needed [a material] that was much lighter, with smaller footings and foundations"

Bowmer and Kirkland have just eight workers on site and one crane driver, but the timber is going up at a fast rate due to its pre-fabricated nature – sometimes putting up 15-20 pieces of timber beams and slabs a day, meaning changes to the structure can be easily noticed from week to week.

Sustainability from Australia to Stratford

The smell of wood wafts around the site as Mr Tobin explains the decision to use timber was not only based on the logistics involved in building above the DLR, but also came down to Lendlease’s global push to use more sustainable materials.

“In Australia, we have the largest and the tallest timber office buildings being constructed,” he says, “with a lot of similar materials to those that are being used here.
“We also have plans to use timber construction like this to build office buildings here in London.”

Although Lendlease had a vision to solely use timber on the build, there are some steel beams and other steelwork involved, particularly in the pavilion’s basement, due to the weight of the stairs and the crowd-loading that is expected to occur when the building opens.

The depth of the pavilion basement's foundations had to be quite shallow, as the tunnel below the site already had foundations of its own.

The substructures on site go about a metre deep in total from what you see looking down below the site. Substructure specialist O’Keefe completed a reduced dig down to 1 m deep, and then put in a series of ground beams and poured concrete in between the beams to essentially form a honeycomb effect.

But during preparation for the build, one of the main challenges that arose came from these foundations for the basement.

Even though the sheet-piled excavation is just a small part of the pavilion, to be used for back of house staff, it was challenging due to the proximity of the DLR exclusion zone.

To work around this, the team produced a 3D model to map out the sub- and superstructure of the build, meaning Lendlease could plan pile depths that would not interfere with the exclusion zone.

This allowed O’Keefe to install the sheet piles to 10 m from ground level, and then excavate 6 m.

One of the most impressive aspects of the build is the rate at which it is taking shape.

Mr Tobin says: “It is about 95 per cent prefabricated, with the timber designed and coordinated before it arrives on site.

“There is no guesswork involved, because every piece of timber has got a tag on it that tells the guys on site where it should go, and there are lifting points on every piece to make sure its weighted correctly and that it's safe before you move it into position.”

Aside from increasing productivity, another benefit of using pre-fabricated timber is that it also helps reduce risk of health and safety hazards on site.

"It is quite a safe method of construction as well, just purely through the fact that there are so many less man-hours in a high-risk environment," Mr Tobin says.

The timber, from supplier Stora Enso, arrives on site in packages ready to be instantly installed as soon as it comes off the back of a truck.

Mr Tobin says: “Because [on previous jobs] we were shipping the timber from Austria to Australia, it was all about efficiency of space in shipping.

However, Mr Tobin explains that concentrating on space when shipping is less important for a London-based project, where unloading efficiency is key.

“What we worked out is that the efficiency of packing it for space kind of cancels itself out when it has to be unpacked.”

“That was probably one of the big lessons we learned,” he says. “We had to stack it as it is [required] here so that it can come out of the package as it needs to be constructed.”

All the timber used on site is purpose-built, specifically for this project. Alterations and measurements are all made offsite, so that when the material arrives it is ready for immediate use.

Carpentry joints for the columns and rafters are pre-cut, meaning most of the work onsite is in the lifting and placing of the timber, and bolting into place.
To make matters easier, the Bowmer and Kirkland team also designs and fabricates its own lifting equipment and apparatus for the large beams, with each job having its own assigned lifting equipment.

Bowmer and Kirkland used a fixing map, which shows the specific fixing that goes into each part of the timber and used individual construction manuals for each beam and each piece of lifting equipment, so that all the timber is installed in a very specific and pre-determined order.

As a multi-national company, Lendlease has the advantage of learning from similar projects it has completed on the other side of the globe, which leaves Mr Tobin confident about the end result of the pavilion and the wider IQL development.

When asked what aspect of the construction, such as overcoming challenges, would inspire the most pride in the project, Mr Tobin says: "If I walked up on that roof terrace at the end [of the project] and I can stand up there and say a diverse group of people have been brought together by this, to me that is success.