Hanging in the balance: what is the future for cross-laminated timber? 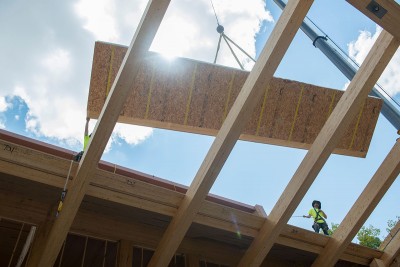 The proposed combustibles ban could be devastating for the cross-laminated timber sector, but are the safety fears are justified?

The future of large-scale timber buildings in England hangs in the balance.

Next month, the government will announce the result of a consultation which proposes lowering the threshold on the ban on combustible materials from 18m to 11m.

The use of CLT – multiple layers of wood engineered into a sturdy single block – has grown rapidly in the UK in recent years. Lightweight and strong, it can be used for buildings up to 40m high and can be manufactured offsite, so construction is quick and precise.

CLT is also extremely positive for the environment. The ‘embodied carbon’ (the sum of the emissions used to produce it) is estimated at around 60% lower than traditional construction. The production of a tonne of concrete accounts for the release of around half a tonne of carbon dioxide, while the sustainable forests planted for timber construction can be a net plus for greenhouse gas emissions.

“We’re potentially taking out of the market the building material that is the most sustainable,” says Andrew Carpenter, chief executive of the Structural Timber Association (STA). “We’ve got a housing crisis, we’ve got net zero to meet by 2050, and yet here we are about to do away with structural timber which is the number one solution when it comes to embodied carbon.”

Those in favour of CLT are calling for the ban to apply simply to combustible cladding, not the structure of the wall.

“For [the] industry, the core problem of the legislation is clear: it tars the entire external wall with the same brush despite there being no evidence that structural walls pose the same fire risk as the external cladding,” says David Hopkins, managing director of the Timber Trade Federation.

Bold claims are made about the fire safety of the product. It is frequently said by its advocates that timber “chars rather than burns” and that it performs better than steel in a fire. But do these claims stand up? Or should we be more worried about the fire safety implications of building large structures out of timber?

Part of the concern is that a number of timber buildings have been damaged or destroyed by large fires recently, including two last summer: an apartment block in Worcester Park, south-west London, and a care home complex in Crewe.

The care home complex, Beechmere, held the European record for the largest amount of timber used in any project on completion, with 1,700 cubic metres. It was home to 150 older residents, many of whom had significant mobility issues.

On 8 August last year, a fire started in what is believed to have been somewhere in the roof, which tore through the building, reducing it to rubble. “We saw a £20m-plus building reduced to dust in less than 14 hours,” said Mark Cashin, chief fire officer at Cheshire Fire and Rescue Service.

The STA distinguish this fire from the debate about CLT by arguing that it was a ‘timber frame’ rather than CLT building. It is worth being clear about these two building types.

Timber frame is a lightweight frame around which the building is constructed, which typically relies on fire breaks to prevent flames getting into the cavity behind the walls and igniting the structure. CLT, or mass timber, on the other hand sees large slabs of wood shaped into panels and fixed together to directly form the walls and floor of the building.

Timber frame is typically used for low-rise construction, but because of its strength CLT can go much higher. This is why it is CLT that is most directly affected by the proposed 11m ban – although some taller timber frame buildings will be caught, too.

David Lomax, a senior associate at architects Waugh Thistleton, argues that CLT structures are a much lower fire risk than timber frame.

“A big slab of timber is going to behave totally differently,” he says. “We know an awful lot about the rate timber burns and how in a fire a char layer forms that can help protect the wood.”

But this argument does not persuade all fire experts that the building method is safe. Dr Rory Hadden, the rushbrook lecturer in fire investigation at the University of Edinburgh, who has researched timber in construction, says these claims should be scrutinised.

“The key thing that I would emphasise is that charring is burning. The charring process itself produces flammable gases and they contribute to the burning within a space,” he says. “The timber is going to burn. It’s marketing speak to say anything else.”

He explains that the use of a combustible material as the structure of a building fundamentally changes the assumptions about safety, as you cannot “decouple” the fire from the structure. “In a non-combustible building, you have the fuel, the tables, chairs, which will burn in a way that is independent to the structure,” Dr Hadden explains.

Dalston Works in Hackney, the largest CLT building in the world on its completion.

“As soon as you start putting a fuel load on the walls, the ceilings, it fundamentally changes how that compartment is going to burn. [So] timber is going to require a rethink of how we do these designs.” He points out that testing is not always relevant for the structure of a building. “You can currently in the UK get a fire resistance rating of 60 minutes or 90 minutes using a timber slab relatively easily,” he says. “But at the end of the 60 minutes or 90 minutes, that piece of wood will be on fire.”

Jon O’Neil, managing director of the Fire Protection Association, a research and testing institute established by the insurance industry, agrees that more work needs to be done on how timber buildings of all types perform in a fire.

“Our view is that it [timber] is inappropriate for some forms of construction until proven otherwise. There simply hasn’t been enough work done and enough research done to say this is the future of construction,” he says.

Mr O’Neil’s view is that building regulations in England have not kept pace with the development of CLT as a potential building method.

“Essentially we haven’t had a full review for 14 years of Approved Document B [the government guidance covering fire safety] and since then timber has become a far more common building method,” he says. “I think the insurance industry is starting to think more work needs to be done.”

A frequent argument made in favour of CLT is international comparison – why should the UK ban it if other territories have not? It is used across the world without evidence of mass fatality fires.

But the truth is that while forms of timber construction have been used across the world for decades, CLT is a relatively young building method – first pioneered in the early 1990s – with its use on high-rise buildings also relatively new. This means that real-world knowledge of fires is still being built up.

Mr O’Neil adds that other countries use different, sometimes tougher, regulatory systems than the UK which may also have an impact on how buildings perform: for example requiring sprinkler protection and multiple escape routes.

The UK system still rests on the ‘stay put’ principle – as well as the linked idea that buildings can resist fire.

More knowledge about how large CLT buildings perform in fires appears to be key. “We can’t say things like ‘an exposed [timber] ceiling is OK’. We can’t guide designers,” Dr Hadden says. “There is a huge knowledge gap there if you want to use exposed timber and still comply with the fundamental idea that the structure will survive burn-out.”

Mr O’Neil says: “Before this is something that’s taken wholesale into the British construction industry, we need to have a British Standard test which looks at its performance in fire. I’m not convinced yet that we’ve got anything like enough of a challenge for something that is combustible.”

This is something the timber industry is investing in. A £500,000 testing programme has been commissioned by the three largest suppliers of CLT: KLH, Binderholz and Stora Enso.

The Structural Timber Association says the testing programme is aimed at “providing scientific evidence of product performance that will allow [the government] to view CLT as a building material suitable for buildings, not just over 11m but over 18m”. The testing will take 18 months and the data is due to be released as and when it becomes available.

Mr Carpenter, adds: “The STA is responding to statements from academia about CLT by providing test-based research evidence of product performance that will enhance the understanding of fire resistance characteristics.

“This extensive research will be completed in 18 months. It is worth noting that each CLT project has a bespoke fire safety strategy relating to scheme-specific details. We’re acting responsibly to counter misinformation.”

There are calls from the timber industry to harmonise English building regulations with the requirements in Scotland – which continue to allow the use of combustible materials in or on the external walls over 11m and up to 18m, provided that test data supports it.

But part of the reason this testing option was removed for England was the way it was abused and misused to justify cladding systems which were wholly inappropriate and are now having to be removed at great cost to the public purse.

As it is policymakers stand between two extreme choices: ban CLT outright or allow its use to continue unchecked within the existing regulations. The most sensible approach may be a middle ground – the development of specific regulations based on science which govern the use of a material which while environmentally friendly will always remain combustible.

This would take time and money, but there is an argument that it is cheaper in the long run to do this work now rather than discover issues later.

“As we’ve seen with the cladding industry, we don’t want to be in a position where the work hasn’t been done, construction goes ahead full steam, and suddenly we find 10 years down the line we have an inherent problem with buildings and we have all the issues with mortgages which have hit the cladding industry,” says Mr O’Neil.

This is the outcome everyone will want to avoid.