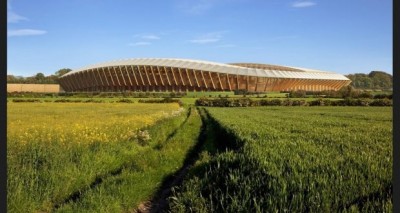 The architect behind plans for a timber stadium for football team Forest Green Rovers has made the case for using the material because of its environmental and aesthetic properties.
The stadium’s superstructure will be “97 per cent” timber, according to Zaha Hadid director Jim Heverin, with steel rods tying the wooden beams together. The architect said one of the features of the material's use would be that in a potential fire it would char rather than melt and can be treated to become flame-retardant.

Heverin said: “Timber needs to be considered as a viable material, just like steel is. We have to balance this with what we have to do for the climate crisis - we have to have timber. [...] We are the experts in the industry and we need to see the future and to map out a route and part of that is building confidence in timber."
Zaha Hadid Architects won a competition in 2016 to design a sustainable home for the League Two side, which is chaired by environmentalist Dale Vince, owner of green energy firm Ecotricity. Heverin said the client was looking for both a low-carbon and attractive design. "Vince wanted something that's beautiful, engaging and emotive," he said.

Heverin said he was “concerned” that timber structures were regarded with suspicion after the Grenfell fire, adding that how it has been bound up with discussion in the aftermath of the blaze is not a good outcome for the construction industry.

He added: “I know that with the revisions [to building regulations] in 2018 that combustible materials over 18 metres are an issue but the stadium is under 18 metres. So it's not technically a concern. I hear that there is talk that [the ban] will come down to 10 metres. And that [would] be an issue for the stadium.”

The stadium design was approved by Stroud District Council in December 2019, after an initial plan was declined in June 2019 due to concerns over noise, traffic and environmental impacts. However, the secretary of state for housing, communities and local government may yet call it in for review.

The architect added that Brexit could make cross-laminated timber a more costly option for construction projects since the material generally needs to be manufactured and transported from Europe, and called for an increase of its manufacture in the UK.