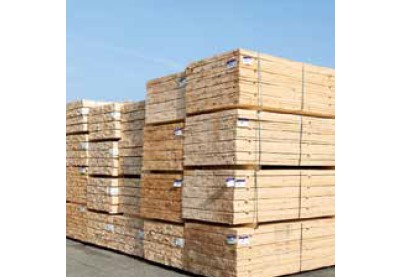 The Structural Timber Association (STA) recently released a white paper demonstrating the vital role timber has in helping the UK achieve net zero status by 2050 and the role it can play in offsite construction.

The white paper 'Increased Use of Timber' explores the stark reality that, without intervention and meaningful change, climate change and its effects will continue to worsen. Contributing an estimated 50% of the UK's total carbon emissions, it is little surprise that the Government has placed a particular emphasis on the built environment in its efforts to reach net zero.

The UK has positioned itself as a world leader in the fight against climate change, becoming the first major economy to legislate a net zero target by 2050, with an interim target of 78% reduction by 2035. Achieving these ambitious goals will require decarbonisation across every aspect of UK industry.

The STA's white paper highlights the key role that timber will play in enabling the construction industry to meet the challenges of industrial decarbonisation and deliver net zero by 2050. It explains why timber has been singled out, by highlighting its exceptional sustainable properties, including its ability to sequester 0.9 tonnes of carbon per metre cubed, as well as its stance as the only truly renewable building resource. It also looks at the construction advantages of structural timber, such as fast build times, and how these can assist with current issues, including the UK's housing crisis.

Demand for housing continues to increase and, despite recording a 33-year high of 240k new houses in 2019-20, development still falls short of the government's housing supply target of 300k homes/year by the mid-2020s. Some estimates suggest that as many as 345k homes/year will be needed to tackle the housing crisis. This need for a substantial increase in the number of new houses must be balanced against the goal of achieving net zero, which means that the role of timber in construction will become ever more important. According to NHBC, timber frame is used in about:

• 9% of newbuilds in England

• 92% of newbuilds in Scotland

• 30% of newbuilds in Northern Ireland.

England, by far the largest market, lags well behind the other home nations, but the solution already exists - according to the STA, timber frame manufacturers have the capacity to deliver up to 70,000 timber frame houses per year in the UK. This presents a major opportunity to reach the government's target while driving down carbon emissions, as well as satisfying DEFRA's England Trees Action Plan to: 'work with Homes England and delivery partners to explore ways to increase timber use in the delivery of housing programmes.'

"We have reached a tipping point in the fight against climate change," says the STA COO Andrew Orriss. "It is clear that for the UK to succeed in its efforts to achieve net zero status by 2050, we must see an increased use of timber within construction. We are aware of the barriers that have to be overcome, particularly regarding safety concerns, so we are increasing dialogue with the insurance sector. The STA continues to conduct research into fire safety and timber construction and is also a key member of the Timber in Construction Working Group, tasked with developing a policy roadmap to help the Government deliver on its net zero commitments. Education for all involved is key and the STA can support the construction industry in better understanding of the use of structural timber through its technical guidance and research."