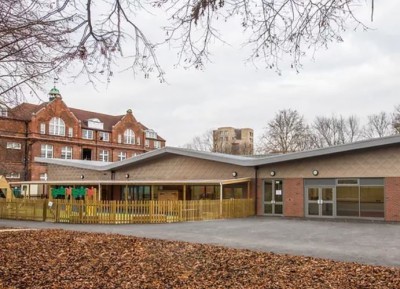 Stonebridge Primary School is an existing school in the London Borough of Brent that was looking to expand and consolidate from two sites on to one site. The project was tendered via OJEU and Mid Group came 2nd in the original procurement.

The winning contractor and Brent were unable to come to agreement on price, with the project being at c.£10.5m against the budget of £7.5m. As reserve bidder, Mid Group were invited to submit a proposal and see if we could deliver to budget.

The project involves the construction of a new, architecturally impressive, hall that will be fully accessible to the wider community and the school alike. It also includes 6 new classrooms, 3 each for Foundation and Year 1. At the heart of the building we have also included an inspiring library space, where younger pupils can garner a love of reading in a fun and encouraging environment.

The building had to compliment the existing Grade II listed Victorian School. The architectural intent was a multi-dimensional roof that would reflect that of the existing school building.

It was evident that the architectural, sustainability and pedagogical aspirations could all be delivered within the budget using an offsite solution that would allow quicker delivery and the minimisation of disruption to the students in the school.

We identified that a SIP solution would offer multiple benefits to the Local Authority and school and, having worked with them previously, we invited Innovare to work alongside us in developing a proposal.

From the outset, Innovare were appointed to develop a solution that would meet the demanding needs of the school and the Borough, on the premise that they would secure the work if we could all find solutions.

The Innovare team worked tirelessly alongside Mid Group and the design team, McBains, to develop a solution that would meet the demanding requirements of all the project stakeholders.
Following a 3 month period, the Mid Group team developed a proposal that satisfied the stakeholders and came in under budget at £7.3m.

Works started on site in March 2018 and were completed in March 2019, 3 months ahead of schedule.

The structure for the main hall area is a mixture of SIPS and CLT, whilst the remaining teaching spaces are built with SIPs and roof cassettes. This allowed the building to be watertight in just 4 weeks, with MEP starting 3 weeks after the commencement of the frame.

The frame was erected by a gang of just 4 people, meaning numbers on site were low and distractions to pupils were minimised.

Lesson's learnt from previous SIP and CLT projects were used to the benefit of Stonebridge, with additional movement joints for differential settlement.

The finished building achieved an EPC score of just 13.