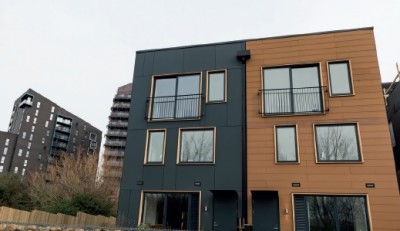 Citu is successfully and rapidly building a carbon negative housing development in Leeds – the first family homes to be constructed in the city centre for more than 90 years. Jonathan Wilson, Development Director, Citu explains more about offsite design and why timber is so important.

Buildings currently account for two thirds of CO2 emissions in the UK and it takes 65 tonnes of CO2 to build a typical newbuild house. Trying to meet the Government’s housing target of 300,000 new homes annually in masonry houses will cause 19 million tonnes of CO2 emissions pa. And unlike other sectors building emissions are worryingly static. With embodied carbon – CO2 emitted from the build – there’s been no progress at all, because buildings tend to use the same carbon intensive materials. We are also seeing larger housebuilders not only slow in the uptake but, in some cases, actively lobbying against targets.

In sharp contrast, the Citu House is manufactured by 10 operatives in a 15,000 sq ft factory which consists of some of the world leading timber frame and posi-joist machinery. The factory is set up with two process lines, one for the timber framing and one for the floor cassettes. Keeping up with demand at the start three years ago was a particular challenge as the whole process and product was a new concept. At the end of Year 1 Citu were comfortably keeping up with demand and planned to double capacity in Year 2 and further double in Year 3.

An important part of the success of the Climate Innovation District is that we quickly realised there was no point making something world class in a manufacturing facility, to then compromise quality and efficiency by applying traditional construction techniques on site. Instead we established a multi-skilled fit out teams and in-house erection team. To date, the Citu Works factory in Leeds has already built the components for the first 28 of these homes, upscaling to build 750 homes per year. By building that many Citu Homes it saves 66,000 tonnes of CO2 pa – the equivalent of taking 14,000 combustible engine cars off the road annually. Extrapolate that out – if the government’s target of building 300,000 new homes per annum was met by building Citu Homes – over 26 million tonnes of CO2 emissions, 7% of the UK’s annual emissions would be prevented.

Timber homes last hundreds of years keeping CO2 out of the atmosphere but that’s not forever. Disposing of them conventionally the CO2 will end up back in the atmosphere, this is where Bio-Energy with Carbon Capture and Storage (BECCS) comes in. This allows decommissioned timber buildings to be burned, creating energy – the carbon stored within them captured and pumped underground. BECCS is currently seen in a few pilot projects globally but this kind of technology is already effectively being baked into existing climate agreements.