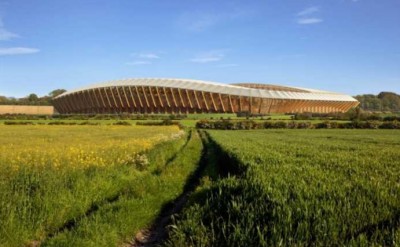 Eco Park would sit alongside junction 13 of the M5 with landscaped parking and two pitches, one of which will be a fourth-generation synthetic surface.

Revised plans were submitted to Stroud District Council after the first application was rejected in June last year. This time, the council's planning committee voted in favour of the design with six for and four against.

Club chairman Dale Vince said: "It is still going to take several years. I think it is going to take us a year of detailed design work. This is an outline planning application. The best case is three years if we started tomorrow."

Forest Green Rovers, which claims to be the world's first vegan football club, is sponsored by green energy provider Ecotricity and has made a commitment to environmentalism. Last month, the club even announced that it would switch its players to bamboo shin pads to reduce its reliance on plastic.