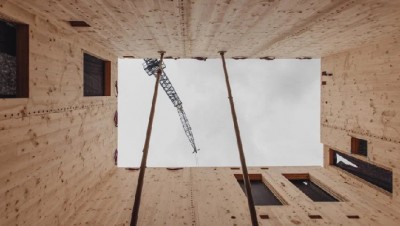 Timber wall systems will need to pass a large-scale fire safety tests before they can be used on medium-rise residential blocks in England under building regulations being introduced by the UK government.

Announced last week by the Department for Levelling Up, Housing and Communities (DLUHC), the regulations will further restrict the use of combustible materials in and on the external walls of buildings.

Among the changes is a ban on metal composite material panels with an unmodified polyethylene core – the highly flammable type of cladding used on Grenfell Tower – for use on all new buildings of any height.

Grenfell Tower was destroyed in a fire five years ago that claimed 72 lives, with the London block's cladding identified as a key cause of flame spread. The UK government was first informed that this type of cladding was dangerous in 2002.

The regulations mean that combustible external wall materials, including timber, will need to pass a large-scale fire safety test before being used on residential buildings between 11 and 18 metres tall.

"It does not end here and I urge the industry act quickly to update their practises in line with these new rules."

The rules expand the restrictions on combustible facade materials, which were banned on residential buildings higher than 18 metres in 2018.

In 2020, the government launched a consultation on proposals to extend this ban to residential buildings above 11 metres, which prompted concern from architects that the regulations would restrict the use of structural timber.

Environmental awareness group Architects Climate Action Network (ACAN), which campaigned to get architects to respond to the government's consultation, welcomed the regulations.

"In my view, this more nuanced approach is the right decision, and this is the outcome that we were campaigning for in 2020, to separate structural components from insulation and cladding and allow the continued use of structural timber within this range," ACAN campaigns co-ordinator Joe Giddings.

The government response to the consultation acknowledged that it did not want to restrict the use of structural timber.

"A large number of responses considered that any ban should not hinder innovation, and any beneficial advancement, in the use of cross-laminated timber and similar engineered timber structural products," it said.

"Our approach will allow the continued use of structural timber in the external walls of residential buildings below 18 metres, if these materials are used safely in accordance with the requirements of the building regulations."

"This hybrid approach has many benefits"

The regulations will mean that cross-laminated timber (CLT) and other forms of mass timber can still be used for the structure of residential buildings under 18 metres.

"It all depends whether the CLT is part of the external wall," said cladding expert Jonathan Lacy, who is chief executive of facade manufacturer Ash and Lacy.

"You can easily oversail a CLT frame with a non-combustible external wall that meets the new regulations,"

"I think this hybrid approach has many benefits and we're likely to see much more of this type of construction. If the CLT is part of the external wall then you're stuffed above 18 metres, but could test below."

Other changes to the building codes guidance include the extension of the above-18-metre ban to hotels, hostels and boarding houses, which were previously excluded.

There will be no new restrictions for buildings below 11 metres that are more than one metre from another building, apart from the polyethylene-cored cladding ban.

The government did not confirm when the changes, which will only apply to new building projects, will come into force. Currently, there are no restrictions in England on the use of combustible materials on the external walls of new buildings between 11 and 18 metres, although they are being removed from many existing mid-rise blocks due to safety worries.

A full ban on combustible materials on buildings taller than 11 metres was announced by the Scottish government in April, with the testing route abolished.