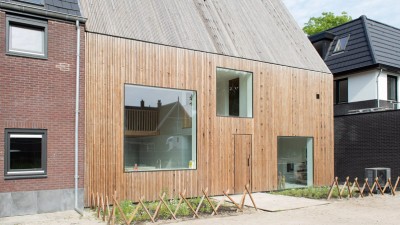 The city of Amsterdam has mandated that 20 per cent of all new housing projects in the Dutch capital must be constructed with wood or other biobased materials from 2025.

The agreement, which is named the Green Deal Timber Construction, has been signed by all 32 municipalities in the Metropolitan Region of Amsterdam (MRA) region.

Increasing the use of timber in the city's construction projects is hoped to reduce reliance on steel and concrete – materials that create large amounts of carbon dioxide during production.

In turn, this is expected to help the Dutch capital meet its goal of "climate neutrality", or net-zero greenhouse gas emissions, by 2050.

The Green Deal Timber Construction was signed during the MRA Sustainability Summit 2021 in October. However, it will not be implemented until 2025.

As an alternative to timber construction, the deal also allows for 20 per cent of all new homes to be constructed with other biobased materials – materials that are derived from biodegradable living matter – such as hemp or cork.

To meet the agreement and qualify as a timber building, a detached house would have to be constructed with at least 80 per cent timber or biobased materials. For multistorey housing up to 10 storeys, this is reduced to 65 per cent, while multistoreey housing over 10 storeys must contain at least 50 per cent.

According to the Amsterdam Institute of Advanced Metropolitan Solutions (AMS Institute), which is supporting the implementation of the Green Deal Timber Construction, the move is expected to reduce carbon dioxide emissions in the city by approximately 220,000 tonnes a year. This is equivalent to the average emissions of 22,000 homes, it said.

Nitrogen emissions are also expected to be significantly reduced.