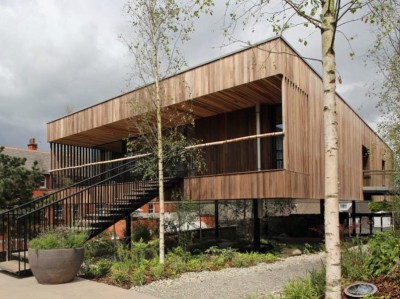 Mass timber has a pivotal role to play in improving our built environment. Dr Pablo van der Lugt spoke to us about some of the reasons why.

Based in the Netherlands, Dr Pablo van der Lugt, sustainability expert, senior lecturer at Delft University of Technology (Environmental Technology & Design) and Amsterdam Institute for Metropolitan Solutions and author of the acclaimed Tomorrow's Timber, has built considerable momentum throughout Europe as a leading advocate of timber in construction and accelerating the understanding and adoption of engineered 'mass' timber. This is in addition to promoting the benefits of timber and the part it plays in the circular economy, biophilic design and our health and wellbeing.

With huge potential to transform the built environment, timber is increasingly seen as the premier carbon-friendly construction material, far outstripping carbon intensive materials such as concrete and steel. "We are in a unique moment in time which sets the stage for a potential major shift towards mass timber construction," says Pablo. "The climate crisis, housing deficit, and latest advancements in mass timber building construction systems, based on increased digitalisation and robotic manufacturing, set the right preconditions for a mass timber building revolution.

"Although the percentage of mass timber buildings in various Western European countries is still relatively low, there are clear signs that this is rapidly changing with several countries and urban areas ramping up their timber building ambitions to meet their climate and circularity ambitions. For example, the Metropolitan Region of Amsterdam has committed to 20% timber use in new residential buildings by 2025, which is a major increase from the 2-3% the urban region is at now. The ambition is to grow further to about 50% in 2030." The UK has much to learn from overseas markets on the use of mass timber across the built environment. Although Scotland has long been ahead of the rest of the home nations in its building of timber frame homes, northern Europe – Sweden, Finland and Germany in particular – have successfully developed a timber building culture for decades, leading to high percentages of timber buildings.

"I see a lot of momentum in the Dutch and UK market," says Pablo. "With a lot of interest in increasing the amount of mass timber buildings to meet climate and circularity goals, but also the perceived health effects – timber buildings provide a very pleasant indoor climate, and an increasing body of research has revealed that the visual application of natural materials including timber in a building can lower stress levels and increase wellbeing through biophilic design.

"But we need a level playing field in each country for timber building – which often means that building codes and regulations which disadvantage light building methods such as mass timber building, need to be adapted. For example, throughout Europe the stored carbon in mass timber products – the so-called Construction Stored Carbon – is not accounted for in the required Environmental Product Declaration which determine the environmental impact, claiming the CO2 is emitted again during end-of-life. However, if constructed well, the lifespan of mass timber buildings is far longer than the IPCC horizon of 100 years, and mass timber can be easily reused — the elements will not be burnt as they simply constitute too much value, storing the CO2 for even longer.

"Once governments and the European Commission further acknowledge the combined potential for sustainable forestry and timber buildings as two constructive vehicles to mitigate climate change and increase circularity, the right policies can be implemented to stimulate, instead of hamper, mass timber construction."

Certainly, here in the UK, the adoption of mass timber has been hampered by the fallout from the Grenfell Tower disaster and building regulation recommendations that have limited the use of structural timber in buildings over 18m – after early notable successful tall timber UK projects – what can architects and building designers do to try and persuade regulators that mass timber has benefits beyond 18m, with many tall timber projects being planned and built globally.

"This is a real pity, as in the past the UK has been leading in mass timber construction, including some taller buildings, such as the work of Waugh Thistleton architects," adds Pablo. "To increase the use of timber many regulatory obstacles need to be overcome which have been warped by the other material industries. What really helps is if (local) government understands the many benefits of mass timber for fast and clean construction through prefabrication (lower CO2 and NOX emissions, less nuisance, quicker building time) but especially low carbon building (buildings as carbon sinks) and start to set local targets for timber utilisation to meet climate goals."

The future of mass timber is a healthy one with CLT, glulam and LVL providing opportunities for zero carbon developments and there is a growing realisation that reducing embodied carbon is an important element of hitting net zero targets – what role can the use of mass timber play in reducing embodied carbon levels? Pablo explains: "Based on sustainably sourced European softwood (which is abundantly available – in Netherlands 99% of all the imported pine is coming from sustainable managed European forests with PEFC or FSC-certification), the built environment is a second carbon sink (1m3 of softwood stores about 1tonne of CO2 for the lifetime). If mass timber is then also used to substitute CO2 intensive materials such as concrete or steel then there is even a third CO2 benefit (in general 1 tonne of softwood, substituted for concrete/steel, leads to a CO2 reduction of 1.5 tonnes CO2). In total the combined benefit of 'climate smart' forestry, sustainable timber replacing other materials, could mitigate over 20% of European greenhouse gas emissions by 2030."

A common criticism of the construction industry is that it is conservative, set in its ways and reliant on traditional site-based practices with deeply ingrained supply chains and historical prejudices. As generations change, so do mindsets. But are climate pressures enough to swing more interest towards specifying timber systems?

"We need to turn things around," says Pablo. "First get rid of the many misconceptions about mass timber building and show that they are incredibly pleasant to live in, better for health, better for the environment but very beautiful and stylish as well – providing new design possibilities. A mass timber building can be extremely modern and high end. We need to show that mass timber building is not only a climate solution but it's cool and sexy, in a similar way as the image of electric cars has shifted, the same needs to happen with mass timber buildings. But for this we need keep informing the audience through smart, targeted communication campaigns — design competitions, demonstrations, documentaries — reaching the right target groups."