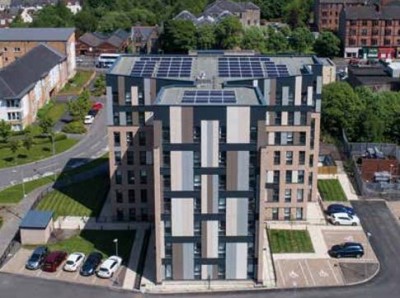 Due to the COVID-19 pandemic, the Government recently extended its consultation period on the use of combustible materials in buildings to 25 May. But pressure is still mounting on how the timber sector can continue to maintain a strong presence in multi-storey construction.

As reported in detail over recent months, the Government has been seeking views on the ‘ban of the use of combustible materials in and on external walls of buildings’, with resulting changes set to make construction of newbuild residential property with a floor above 11m (approx. four storeys) problematic. The original ban was introduced in the wake of the Grenfell fire disaster and set at 18m but for the timber industry – and the architects and building designers working in it – this could potentially mean the specification of engineered timber such as cross laminated timber (CLT) stopped in its tracks.

The potential ramifications behind less structural timber could also impact the use of timber everywhere in the built environment – as such it is critical that this review does not inadvertently ruin one significant route to achieving the UK’s 2050 net-zero economy targets.

The Timber Trade Federation (TTF) has been vocal and hugely supportive of its members and has created a comprehensive online resource for the entire timber sector to use, including information on the combustibles review and a route map forward to clearer policy developments. “Almost two years ago, the Government conducted a consultation regarding the use of combustible materials in and on the external walls of buildings over 18m in height,” says CEO David Hopkins. “This focused mainly on the role of cladding and preventing the spread of fire over large surfaces in light of the disaster at Grenfell. In many people’s minds it became known as the ‘combustible cladding’ ban.

“Both then and now, we continue to support the efforts of Government to make buildings safer. However, we believe that safer buildings in the long term will only come through an evidence-based approach. One of the key points we raised at the time was the need to differentiate between the external cladding and the structural elements of walls. If the Government does want to make buildings safer this distinction is essential.

“Amidst the political clamour for a ban, these calls were disregarded when they were first made, and we have since seen a significant impact on the use of CLT and mass timber as structural elements. Now the Government looks set to repeat the mistakes of the past by extending this ban down to buildings of 11m in height. Unless we work together now to act and respond to the recently announced review of the combustible materials legislation, there will be serious business and environmental consequences. The TTF raises key points on why they believe the ban will create poor policy outcomes including:

• A ban down to 11m, which includes  the structural walls of buildings,  will impact the use of wood and  wood-based products in ways  counterproductive to achieving  Government targets on housing,  climate change, and sustainability,  without giving clarity or making   buildings safer

• Any extension of a ban on  combustible materials from 18m  currently, down to 11m, should  focus on the external cladding, not  the structural wall itself

• The best way that the Government  could achieve a safer building  system is by introducing mandatory,  comprehensive fire-risk assessments  during the design process for  buildings such as high-rises,  community centres. The increasingly influential Architects Climate Action Network (ACAN) has also been asking for a group effort to promote structural timber in the light of the 11m change, saying the current proposals unnecessarily impact the ability to build with timber as the primary structural material and comes despite a significant amount of UK innovation in the use of engineered timber systems. “ACAN is concerned by the implications of this proposed ban on the UK’s ability to mitigate the climate emergency, as timber has a much lower embodied carbon than other commonly used structural materials or systems, including concrete, steel and masonry. Timber can sequester large amounts of carbon from the atmosphere, storing it within the building for as long as it stands. ACAN is calling for responses to the consultation from individuals and practices across the architectural profession and further afield. Indeed, ACAN is supporting the TTF on the key responses including:

• Focus the ban on combustible cladding, as distinct from external  walls. This will help provide the clarity needed for designers and specifiers to build better and safer

• Take a science-based approach. Use BS8414 as the base for fire safety compliance, which was found to still  be fit for purpose in the Hackitt Review

• Align legislation with the Scottish approach. This will encourage  a common regulatory approach  throughout the UK improving clarity  and safety.

In addition, ACAN’s other key concerns are that designers should not be unnecessarily impeded in meeting the targets set out by the Committee on Climate Change aimed at decarbonising the construction industry.  Also, the government should recognise the significant contribution made by UK designers in fire-safe timber architecture, and these efforts should be supported through new regulations regarding safety.

Anthony Thistleton, partner at award winning architects Waugh Thistleton and a huge exponent of CLT has said: “The legislation excludes materials that are safe and are not part of the façade, such as CLT. This is damaging for two key reasons: by allowing certain combustible elements, it implies that these are safe, which is not necessarily the case and could lead to facades that do not adequately resist the spread of fire. It also implies that materials that are proscribed under the ban are inherently unsafe, which is also not always the case. The UK has been an acknowledged global leader in the adoption of this building technology over the last decade, which supports innovation, economic investment and employment. The loss of leadership could have a significant impact on these benefits.”

It is almost inevitable that the consultation will throw up more questions than answers, but hopefully the government will see the sense of moving structural CLT and glulam outside the scope of where it presently sits. This will also help maintain the momentum engineered timber has gathered over the last few years in providing stunning and sustainable architecture. Timber is also a key material in offsite construction with timber homes a key plank in achieving the UK’s tough housing targets. It is also crucial that any amended legislation must dispel any uncertainty and misunderstanding within the construction industry around the use of engineered timber. The last thing the assurance, insurance, lending and financial industry requires is uncertainty. There has never been a more important time for the widespread use of timber and benefits it delivers to a healthy, low carbon economy – as such the government must rethink its approach and advice on the use of timber in  our buildings.

The Government consultation  can be found at:

To view the article along with the complete magazine click here