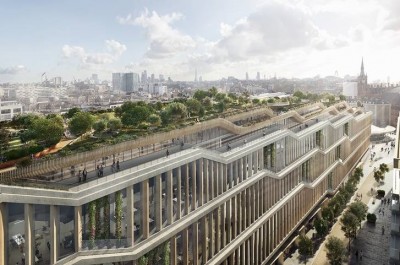 Mass timber can help us tackle the climate emergency safely and we cannot afford to ignore it, says Maribel Manticon
Following the Grenfell Tower fire tragedy in 2017 structural timber, along with all combustible materials, has been banned in the external walls of residential buildings above 18m. Public safety is paramount and there was clearly a need to provide reassurance. Yet structural timber has become an innocent casualty.
In the midst of a climate emergency, structural timber can play a key role in assisting with the removal of carbon dioxide from the atmosphere and give us a chance to avoid catastrophic and irreversible climate impacts.

We must radically cut carbon emissions and cannot afford knee-jerk reactions that may undermine our efforts to do all we can to secure a future for our children. What we need are carefully considered strategies and regulations.

Since the Great Fire of London in 1666, timber has been generally perceived in the UK as unsafe, especially compared to the two most common structural frame materials, concrete and steel. However, concrete and steel represent a staggering 11 per cent of global carbon emissions and we really need to look elsewhere moving forward. To put it into context, concrete’s carbon emissions are 550 kgCO2/m³, steel’s 12,000 kgCO2/m³ while, in comparison, cross-laminated timber has a negative emission of -600 kgCO2/m³.

Clearly not all timber products have the same level of fire-resistance. Mass or engineered timber can match or exceed the performance of concrete and steel. In the UK, structural elements over 18m require two hours of fire protection. Under test conditions, 180mm cross-laminated timber lasts over three hours. Performance-based fire engineering needs to be taken into consideration to meet building regulations.

Prefabricated engineered timber and modular CLT also have the sustainable benefits of reduced waste and energy during manufacturing.
Laminated glass balustrades, also included in the combustible ban, are being considered for exception. Yet, although the RIBA had called for structural timber to be exempt, this has not been taken up by the government. How can it be that there is the time and appetite to reconsider glass balconies, but not to review structural timber, which could make a significant shift towards zero-carbon buildings?

Of course, making buildings safe is a given, but there is a misunderstanding here that needs to be put right. And it needs to be done quickly.
By using off-site manufactured structural timber with non-combustible insulation and cladding, we can design buildings that are safe, better for the environment and for our wellbeing.

In Copenhagen, a beautiful all-timber district is being planned. In the USA, where it meets building regulations for fire safety via testing, mass timber is being embraced with large glulam columns and beams often appearing instead of concrete and steel in large buildings.

The world’s tallest timber building, the 18-storey Mjøstårnet Tower in Norway, has been designed to withstand a fire that is left to develop freely without active extinguishing and now Sweden has unveiled its own tall timber building, the Kajstaden scheme by CF Møller Architects.

If these countries can put safety procedures in place to allow them to build with timber so can we. We must insist that the government reviews this, puts in place fire test compliance that permits the use of structural timber members and encourages further research and development in this field. Without this, not only will we fall behind other countries but we risk missing our legally-binding 2050 Net Zero target.

Current regulations here result in strange contradictions. Google’s new headquarters in King’s Cross by BIG and Heatherwick Studio will boast the largest wooden façade in the world (pictured) and this is considered acceptable as it is an office building. But in the residential sector, all over the country even small four-storey housing developments are seeing modular CLT being designed out.

Mass timber can help us tackle the climate emergency safely and we cannot afford to ignore it.

Maribel Mantecon is an associate at CZWG Architects