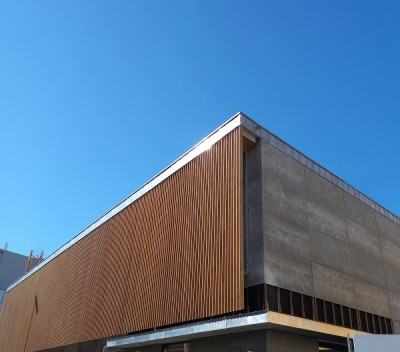 Little over a year since production commenced at the new Xilonor cross laminated timber (CLT) factory, the first large project in Lugo, Spain is receiving its finishing touches with the UK market now a huge focus. During this critical launch period, the Spanish manufacturer has successfully delivered over 100 projects.  These range from tiny structures for exhibition displays, through small and medium residential properties meeting Passive House standard, right up to large multi-storey blocks both public and commercial as well as private.

Production capacity is now approaching 30,000 cubic metres of CLT per year, and the plant has reached a position where it can take on virtually any project however large or complex.  Processing Pinaster and Radiata pine harvested within a 60km radius of the factory, Xilonor is already manufacturing with true consistency and has achieved a rate of production exceeding initial expectations.

Maximising the utility of available resources with careful selection and tight quality control, the properties of Galician Pine are well suited to CLT manufacture, averaging a density of over 500kg per cubic metre which compares favourably with the more common spruce which is frequently perceived as a more viable species for mass timber products.  This key characteristic brings benefits in various forms including the possibility to use fewer fixings to meet structural requirements which in turn means cost savings, less design complexity, and shorter installation times.  Also linked to density is fire resistance, the higher it is the better a timber will tend to withstand structural failure through exposure to fire.  Ongoing laboratory testing is revealing just how well Xilonor CLT performs, with encouraging results.

The natural qualities of Galician timber are a key part of the equation in raising the standard of CLT, but without a well-developed manufacturing process no timber will produce a high grade CLT panel.  At Xilonor, planks known as lamellas are assigned strength classification via an automated mechanical process.  This allows the average modulus of elasticity for each layer to be accurately determined for every panel, something which is simply not possible where lamellas are classified visually.

Xilonor opted also for a high specification hydraulic press, ready to evolve with emerging developments.  High pressing capacity means the raw timber can be trimmed less aggressively, and lamellas can be pressed into position both vertically and laterally.  Hydraulically controlled pads then hold the pieces in position while the panel is formed, and the PUR glue cures.  This increases the percentage of raw material that is ultimately usable while further reducing production waste.  Delamination testing has shown the panels far exceed industry requirements thanks largely to the standard of pressing, up to 10 times the pressure of an equivalent vacuum press. Lateral pressing ensures gaps between lamellas are minimal, further enhancing the mechanical resistance of the finished panel.

A new public building destined for social functions in Lugo, Spain, showcases mass timber construction in a building that will be enjoyed by the local community.  This building seamlessly integrates mass timber with more industrial and technologically advanced materials. A collaboration between PEMADE, Santiago University department specialising in timber engineering and sustainable forestry, together with gAU Architects who took on the development and final execution of the project.

Lugo council had two predominant criteria for the building, primarily that the ground floor space would be flexible and easily adapted to a broad range of uses including recreation, training, and activities of community and social value.  The remaining space would be distributed on a first floor and would be divided into a series of rooms destined for social work and administrative activities. A second prerequisite was that the building would be highly efficient and use the most sustainable materials available, namely it should achieve nZEB classification. This requires near zero energy consumption and would become a driving factor in the early decision to select timber and specifically Xilonor CLT for the main structure of the project.

The ground floor consists of three zones, firstly the entrance and vestibule area where reception is located.  Also found here is access to the upper floor with a broad staircase and single elevator.  The remaining two areas are expansive rooms which feature mobile partitions allowing the space to be fully unified to form a large single hall.  Defining this interior space from conception is a series of porticos that strikingly exhibit the timber structure of the building, made from a combination of 260mm 8-layer CLT beams with a depth of over one metre, resting upon GL24 vertical posts at 2.5 metre centres and spanning the full 10m width of the building.

These deep section CLT beams allow the inner space to be completely free of supporting elements, making optimal use of the available area while maximising adaptability.  This feature forms the heart of the structure, forging the design of the entire building's layout and is mirrored in the upper floor with CLT beams of a smaller 0.7m section bearing a lesser load.

A row of large triple-glazed windows fuses the building with the exterior surroundings on each floor, bringing an influx of light into every corner while uniting the community and the space within.  Floor level windows allow the exterior space to the east wing on the ground floor to extend into the main hall, making it possible to adjust the layout to suit functions of any nature.  The light in communal spaces is directed such that it highlights the timber elements, bringing the woodgrain to the fore in a subtle display of modern timber engineering.

100mm 3-layer CLT slabs form the floor decking of the first level, while a lighter 80mm 3 layer forms the roof.  10m long 100mm CLT panels compose the lift shaft, which was assembled prior to being erected vertically into position. This helped minimise complexity and led to a reduction the number of fixings required. The staircase is constructed from 160mm 5-layer slab with treads and risers cut from 280mm GL24. This element was machined and assembled at the Xilonor factory, to then be craned directly into position on site.

The use of mass timber as opposed to more conventional building materials meant significantly less weight throughout the structure, which then permitted shallower foundations, a reduction in the section of the beams, pillars, floor slabs and walls while allowing the space to be fully exploited.  Furthermore, the use of timber in all primary structural elements allowed the buildings envelope to be far more energy efficient with minimal thermal bridging, making the nZEB target more easily reached.  Heating is achieved via simple heat pumps, which regulates underfloor heating while a series of radiators supplement temperature control.  This along with a heat transfer air exchanger helps maintain a comfortable environment year-round.

Next for Xilonor is a significant increase in production capacity up to 60,000 cubic metres per year.  The site has extensive room for expansion where additional operations can be implemented.  Projects on the horizon include numerous residential and public buildings, and a very exciting in-house development at the Merseyside UK headquarters. A series of explorative projects including the Kew Gardens Tree House exhibition where three designs will be manufactured and installed at Kew for the 2023 season are also in the pipeline.

"CLT remains a largely unknown material, even among timber construction professionals, and we want its full potential to be realised," says Sen Perez, Xilonor UK Manager. "Only through open conversation where no question is a bad one will we discover the true versatility of this material."

With a logistics platform bringing bulk shipping vessels directly into the UK, Xilonor can manage any volume of project from just a few cubic metres up to any volume necessary.  Transport costs are kept significantly lower this way, and the entire process is taken care of by the UK part of the business. Xilonor welcomes diverse enquiries with a direct and personal approach.