Why a Fabric First approach will become the default in 2025 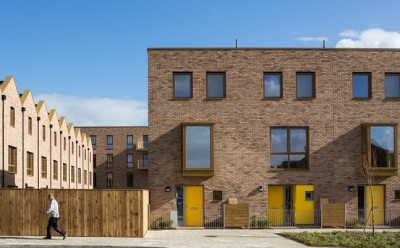 The fabric first approach to building design means maximising the performance of the components and materials that make up the building fabric rather than relying on post construction additions such as photovoltaics or energy saving technology.

Fabric first uses methods such as maximising airtightness, optimising insulation, eliminating thermal bridging, optimising solar gain (the increase in temperature through solar radiation) and natural ventilation, and using the thermal mass (the ability of a material to absorb, store and release heat) of the building fabric.

Over the whole life of a building this is a cost-effective way of saving carbon and delivering energy efficiency as opposed to simply adding new solutions post construction.

Members of the radical Insulate Britain climate change and fuel poverty protest movement have been willing to take things to the next level – shutting down motorway intersections, demanding that "the government improve the insulation of all social housing in the UK by 2025 and retrofit all homes with improved insulation by 2030".

These are extreme acts for what sounds like a mundane demand, but if this goal was achieved it would go some way to reducing the 15% of the UK's total emissions that come from heating homes.

Building energy efficiency has also become a national security issue, with the Government launching its UK Energy Security Strategy in April this year.

The document sets out plans to build on the Prime "Minister's 'Ten point plan for a green industrial revolution', and the 'Net zero strategy'", and "Comes in light of rising global energy prices, provoked by surging demand after the pandemic as well as Russia's invasion of Ukraine."

The strategy includes nearly £1.8 billion targeted at low-income households through the Home Upgrade Grant and the Social Housing decarbonisation fund, to assist in the installation of energy efficiency measures, and should improve up to 500,000 homes.

To date building legislation and regulations haven't enforced fabric first, however there are suggestions that it will be included in the Future Homes and Buildings Standard, due to be implemented in 2025, setting standards for all future buildings.

The Future Homes and Buildings Standard outlines changes to Building Regulations Part L (conservation of fuel and power) and Part F (ventilation) to ensure that all new homes in England are futureproofed with low-carbon heating systems and high levels of energy efficiency.

Full technical specification for the Future Homes Standard will be consulted on in 2023, with legislation and implementation by 2025.

As an interim step, announcements surrounding changes to Part, L are expected to come into force in June this year which will ensure that all new homes produce 31% less carbon emissions, a step that will have a significant impact on specification decision making.

For windows it will affect the maximum allowable u-values of glazing products.

U-values are a measure of heat loss through a material, and they're used to measure how effective elements of a building's fabric are as insulators; that is, how effective they are at preventing heat from transmitting from the inside to the outside of a building. With u-values, the lower the figure the better.

The current maximum allowable figure for windows stands at 1.6W/m2K, but in June this will be reduced to 1.2W/m2K, and it is suggested that this figure will drop to 0.8W/m2K in 2025.

What does this mean for those specifying windows?

Heat is not only lost through window glazing itself, but also through the frame, and certain materials are better at preventing heat transfer, so lend themselves to lower u-values.

Many windows manufacturers are having to make significant adjustments to their products in order to meet this year's u-value reduction, with some requiring a complete redesign to meet the anticipated changes in 2025.

The decision of what windows to choose has become more complex than simply opting for triple glazing, as it's possible for a double glazed timber window to perform better, cost less and have a significantly longer lifespan that triple glazed PVCu.

At NorDan we've met the standards set by Part L for many decades, because our windows are designed and tested to exceed British Standards for weather performance.

Why the over performance? Because NorDan's products were originally designed for harsh Norwegian maritime winters.

Whether it is thermal bridging, air permeability and thermal transmittance, NorDan's products are at Passivhaus standards, and our typical double-glazed windows are best-in-class, meaning that we can achieve 2025's predicted change to standards with ease today.

In reality, we've been the fabric first option for architects, specifiers, housing developers and contractors for many years now, and are increasingly working with new customers who are realising that the products they've historically chosen will no longer meet the required standard.