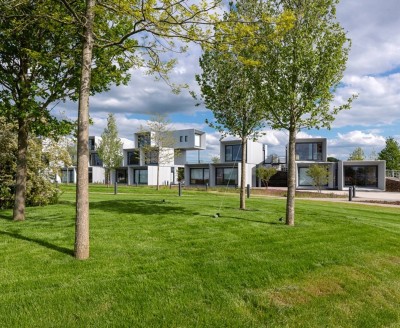 The practice has completed a series of 26m² ‘pods’ for the Dyson Institute of Engineering and Technology in Wiltshire
The series of stacked cross-laminated timber aluminium-clad pods are designed to accommodate up to 50 students in total, plus visiting Dyson staff. These are arranged along a curved and landscaped bund, which describes a radius centred around a new two-storey ‘roundhouse’ hub building, accommodating social and teaching spaces including a restaurant, bar, lecture-cum-screening room and study space.

The pods were factory fabricated in Scotland where bathroom units, fitted furniture and electrics were installed. Measuring 8 x 4 x 3m and designed to be accommodated on flatbed trucks, they were transported for finishing to Dyson’s Wiltshire facility at the Hullavington airfield, where the aluminium rainscreen cladding was added, before being craned into position on site.
‘I suppose it’s a bit like Norman Foster and Apple, although we’ve worked together much longer,’ says Chris Wilkinson.
This time span of involvement has since seen the practice repurpose the original Dyson factory as an enlarged research and development centre, after the company made the controversial decision to move all production to Malaysia in 2003. Earlier this year, the company – which was founded by the inventor and industrial designer James Dyson who notably expressed his support for Brexit – made the further controversial announcement that it was moving its HQ to Singapore. Despite this, development is still happening at the company’s Wiltshire base. So in addition to this new institute, at the Hullavington airfield site old hangars are being repurposed to form a new automotive HQ for the long-mooted Dyson electric vehicle.


Students at the Dyson Institute of Engineering and Technology complete their four-year engineering degree course – at present validated by Warwick University – while working as part of Dyson’s staff, in an education model that integrates higher education with commercial research and development. Having run the programme for two years now, James Dyson thinks the company benefits from students’ fresh thinking. ‘Doing things the wrong way contributes to innovation – even seemingly naïve or silly suggestions ¬can too,’ he says over lunch at the new campus. This is a man who famously tested 5,127 prototypes before producing his first commercially successful vacuum cleaner model.

The pods of the new undergraduate village are arranged in small clusters of up to six units, with the units cantilevering out three metres from each other, pushing the structural properties of the CLT. These back on to the bund, which is formed in part of spoil from the previous developments on the site.

This less regimented arrangement and feel of a ‘village’ compared to the strict orthogonals of the rest of the campus is further increased by landscaping, including banks of wildflowers and grassed common areas. The sedum-covered roofs form part of a water attenuation system which take run-off into a rill.

Visually, the whole has echoes in miniature of the ziggurats of student rooms at Denys Lasdun’s University of East Anglia campus, but when asked if this was a model for his thinking, Chris Wilkinson points more to Moshe Safdie’s Habitat 67 for the International Exposition in Montreal as inspiration.

This indeed crystallises some of the feeling about this campus’s architecture: a retro-future aesthetic, underlined by the decision to wrap the pods in aluminium rainscreen: an odd choice for units that otherwise have low embodied carbon, with their minimal concrete foundations and the formed of highly thermally insulated CLT cores.

The central ‘roundhouse’, a steel-framed pavilion-type building formed of two stacked cylinders topped by an oversailing brise-soleil roof, similarly has a slightly back-to-the-future feel to it, this time 90s High-Tech. Its two floorplates are divided between larger glazed social spaces to the south – restaurant below and bar with terrace above – while to the north there are metal-clad service rooms including toilets and kitchens.

Overall though, this is a coolly impressive project. The only surprisingly underplayed element is its environmental engineering, which though good is not the generator here, something you might have perhaps have expected to have driven the design, given the pedigree of the client.