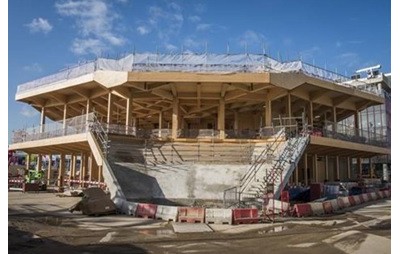 A cross-laminated timber pavilion at Lendlease’s International Quarter London development has topped out in just 14 weeks.

The ACME-designed pavilion has completed its first construction phase less than four months after the first parts arrived on site during the summer.

Lendlease is both the developer and contractor on the scheme in east London.

Made almost entirely from CLT and glue-laminated timber, the two-storey pavilion will be at the centre of the new 22 acre office and retail development in Stratford.

The 10,000ft2 structure will contain restaurants on the ground and first floors, with a bar and terrace on the roof and is due to open towards the end of next year.