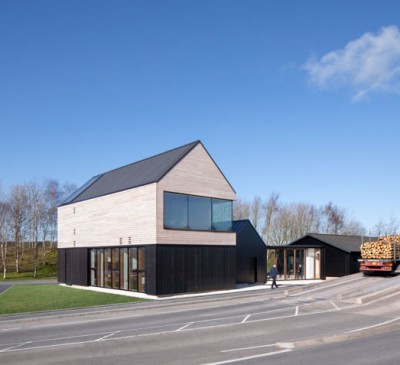 The James Jones & Sons' Lockerbie site is the largest single site sawmill complex in the UK and the most technically advanced. As such, Lockerbie receives a high number of visitors – including small groups of customer visits, customer training courses, academic institutions, and industry events.

The idea for the building recognised the need to provide increased office accommodation, better visitor facilities, and the opportunity to host on-site training courses and industry meetings, which previously had to be conducted offsite. James Jones & Sons held a design competition between two architectural firms and the winning team was Konishi Gaffney from Edinburgh, led by Kieran Gaffney.

Konishi Gaffney did not have to look far for materials for the new offices and visitor centre at the UK's largest sawmill: the building acts as a demonstration project, almost entirely erected from James Jones's own products, with an approach to minimising the use of steel and maximising timber. This ode to sustainable timber construction showcases the company's ambition as well as its operations; presenting a flagship for Scotland's timber industry.

The winners of the RIAS Awards will now become the 'longlist' for the RIAS Andrew Doolan Best Building in Scotland Award – one of the most significant architecture prizes in the world – which will be announced in November. Recipients of the 2022 RIAS Awards are also eligible for the Royal Institute of British Architects (RIBA) Awards.

Drawn from all across Scotland, the winners of the RIAS Awards 2022 include a new secondary school that places students' mental health and well-being at the heart of its design, the rescue and restoration of an iconic Modernist house, and an exquisite rural office building on the edge of the Balmoral Estate.

"This year's awards show how Scottish architects are rising up to today's challenges – from the climate emergency to the nation's mental health – and prove the fundamental role that architecture plays in society," said RIAS president Christina Gaiger.

In addition to this latest award, the Lockerbie visitor building has also won the 2021 EAA Wood for Good Award and  two Scottish Design Awards, winning both the Architecture award for a 'Commercial / Office / Hotel Building or Project' and the overall 'Architecture Grand Prix' award.

"We are delighted with the recognition the new building has received," said Rob MacKenna, general manager at James Jones Lockerbie site. "The striking design and innovative use of solid and engineered timber products are a great example of how timber can be used to deliver high quality office and meeting areas. Konishi Gaffney architects were able to articulate this in the building's design and its fantastic their efforts, and those of the project team, have been recognised."