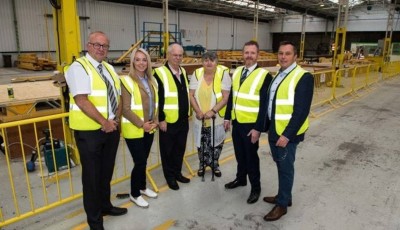 The iconic Metal Box factory in Neath, an important part of the local economy for more than 80 years, is now operational again for the first time in almost four years. Local councillors were given a tour of the site to mark the occasion and be shown plans for the further development of the site.

The factory is up and running again thanks to investment by Sevenoaks Modular, a Neath-based specialist in timber frame construction. The company aims to invest some £6.5 million in acquiring and regenerating a large part of the industrial site. With phase 1 an investment of almost £500,000 now complete, some 20 people are already employed at the site.

Councillors for Neath Port Talbot, Sandra and John Miller were recently shown around the 250,000 sq ft site and discussed the company’s future plans for it. Sevenoaks Modular, which currently employs around 100 people in Neath, anticipates it will double its workforce in the next 12 months in conjunction with its expansion to the site. The move will also allow it to go from producing 1,000 homes per year to more than 3,000 per year.

Sevenoaks Modular will acquire around half of the site from Neath Port Talbot Council, which bought the factory in 2019. It will move all its operations to the site once it has been refurbished as will its sister companies Hale Construction and Hale Homes, both part of the Hale Group. Between all the companies, some 200 people will be based at the site.

John and Sandra Miller said:
“When the Metal Box closed I don’t think anyone expected to see its doors open again. After our guided tour of the facility this morning it is easy to become hopeful again. This is an exciting development which highlights a company who are able to adapt and utilise the space available to them.
“Although this morning’s tour was only to the first phase, we were extremely impressed by what we saw and with the plans for expanding into the next phase. We were given a full account of the vision of the company and the intention of those driving the project. We look forward to seeing this local company going from strength to strength.”

Charlotte Hale, director of Sevenoaks Modular, said:
“We are delighted to see the site up and running again and there has been a real buzz in the local community as a result. At present, only a small part of the site is operational but we have around 20 people employed there and one of the two large-scale cranes at the site is now working again following extensive repairs and refurbishment.

“This is just the start for us. We will eventually have all our manufacturing based at the site. Our long-term plans will mean a significant investment in the local economy and allow us to keep pace with demand and all while pushing an environmentally friendly agenda, both in terms of the style of construction we champion and in terms of how we will regenerate the site itself.”

Supported by the public and private sectors, Sevenoaks Modular will make a significant investment to regenerate the site. It will install a new roof, conduct extensive repairs on the main premises, build offices and install an eco-friendly wood burning facility, complemented by cutting-edge energy storage units, which will recycle offcuts from the construction process and power the entire site.

In partnership with local education providers, it will also establish a training academy for young people looking to get a foothold in the construction industry, and open parts of the site up to use by the wider community. The company anticipates all the work will be completed and the site fully operational within 12 months.

Sevenoaks Modular has an order book in excess of £10 million all with tier one contractors and large property developers. It anticipates further rapid growth, which is partly being driven by government initiatives to build more homes quickly. The UK Government set a target of building 300,000 new homes in 2017 and the Welsh Government aims to build 20,000 new affordable homes by 2021.

JG Hale Construction now has a turnover in excess of £40 million. It will move all of its operations to the new site using the vast space as an indoor, offsite construction hub.

The Metal Box factory site was occupied for more than 70 years by the Metal Box container factory known locally as “The Box” but has been vacant after the previous occupiers, the Crown packaging company, closed in 2016.

With support from the Welsh Government’s targeted regeneration investment programme, Neath Port Talbot Council bought the site in 2019 with plans to turn it into a business zone to create jobs. This investment from Sevenoaks Modular represents a big boost to that strategy. The entire site could provide space for up to 500 jobs with interest from a number of locally based companies.