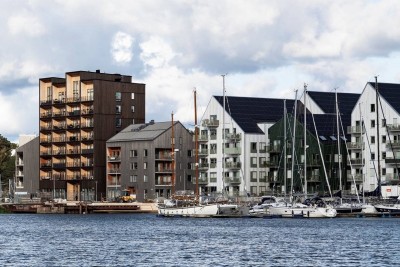 A prominent umbrella group for the built environment professions, chaired by former RIBA president Stephen Hodder, has cautioned the government against taking action which would prohibit the use of timber as a structural material in buildings

The significant intervention by the Construction Industry Council (CIC) is in response to a government consultation published in January on banning combustible materials, including timber, from the exterior walls of new residential buildings over 11m in height in England and Wales.

The government’s proposal has met opposition from campaign group Architects’ Climate Action Network (ACAN) and practices including AHMM, dRMM and Glenn Howells, which have pointed out that the ban would effectively prohibit the use of structural timber for residential schemes over three storeys despite the fact that large-scale use of timber could be a key response to the climate emergency given wood’s ability to act as a carbon store.

The RIBA has also urged the government ‘not to include the primary structure of the building’ in the proposed combustible materials ban, consultation on which has now closed, while the Observer’s architecture critic Rowan Moore also appealed to communities secretary Robert Jenrick to have ‘courage’ in this regard.

The CIC’s voice will carry particular weight given that it represents professional bodies, research organisations and specialist business associations including the BRE, the Association for Specialist Fire Protection, British Approvals for Fire Equipment, the Institution of Fire Engineers, Local Authority Building Control and the National House Building Council.

It said in its submission: ’We are aware of significant concern from organisations with an interest in timber and sustainability, and how this may affect timber structural components.

The CIC’s submission also suggested that the ban on combustibles should go further, recommending that the government extends it to a wider range of buildings than is currently proposed including care homes, halls of residence and potentially schools.

Anthony Thistleton, co-founder of Waugh Thistleton Architects, a pioneer in the use of structural timber, said: ’It is great to see the CIC stepping up to address these issues and especially their support for timber structures. They are right that we need to make the current ban more effective before we extend it to other building types.

’The government is failing in its legal obligation to only impose restrictions justified by clear evidence. There is no evidence to support the inclusion of structural timber within the ban. There are less restrictive approaches to ensure fire safety such as encapsulation of combustible elements and fire testing.’