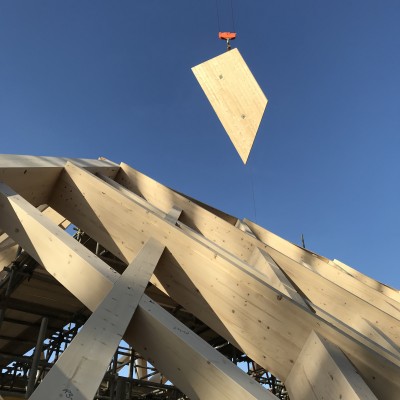 Maccreanor Lavington recently completed a refectory at Ibstock Place School, an independent, co-educational day-school for over 1,200 four- to 18-year-old pupils in south-west London, after winning an invited competition in 2016.

The building replaces its conservatory-style, ‘acoustically flawed ‘predecessor at the heart of the landscaped school campus with three simple attached volumes. It trebles the previous area on the same footprint, containing versatile dining space, a full commercial kitchen, a sixth form study and generous basement stores.

The design honours the importance of lunchtimes in supporting pupils’ social and emotional development: re-imagining the grand tradition of the banqueting hall, it provides a functional and flexible space for the celebration of communal school life.

The refectory is wrapped in a cloister of sheltered passageways. Soft stock brick and plain clay roof tiles reference the existing adjoining buildings, conferring longevity and an established presence within the grounds. Its articulated form allows glimpses of the trees between roofs that, as in a Lutyens’ country house, were designed with low eaves to maximise internal volume whilst containing the massing. An intricate timber roof structure conveys intimacy and grandeur to the interiors, where natural light and orchard views bestow a calm and contemplative quality upon the warm, convivial space. Rising to three glazed lanterns, the roof supports a simple natural ventilation strategy and defines the uses below.

To create an interior that was celebratory whilst warm, welcoming and comfortable to use, we naturally looked at timber – both as a structural element and as a finish. In our practice we enjoy using wood, because of its low carbon qualities, visual warmth and character; and because of the quality and programming benefits that prefabrication of timber components can offer. As the largest element the building, the roof’s geometry and construction were a focus for aesthetics and performance in which the use of timber became instrumental: working with structural consultants engineersHRW we developed a structure that provides a clear order and scale to the building’s volumes.

The refectory’s ceilings are defined by a striking spruce glulam lattice structure, with oak panelling insets incorporating acoustic absorption. The glulam elements are constructed on a diamond grid, although, structurally, they owe much to a traditional cut timber roof.

Designing the Roof “There is a hierarchy of elements with the primary rafters spanning between a steel ring-beam at the eaves and a timber ring-beam at the lantern or the corner rafters’” says Greg Nordberg, engineersHRW. “The primary rafters support secondary and tertiary elements that form the rest of the lattice. The secondary elements are sized to match the primaries, providing the desired pattern within the space. Using the rafters as a two-way spanning diagrid was also considered in detail. This format reduced the stresses on the individual members however the more onerous connections meant equivalent sized sections would be required. Overall, the hierarchical approach was just as efficient and more economical. The stiffness of the roof geometry and the truss action of the roof were considered with separate models to provide an envelope of forces for element design and examine alternative load paths for disproportionate collapse.’

Between the deep rafters sits a subsidiary grid of smaller glulam sections. The striking graphic arrangement of the rafters into this ‘tartan’ provides a rational and attractive framework for oak batten infill panels with acoustic backing, which were prefabricated and fully finished offsite. The geometry was developed to limit the panels to just four different shapes across the building and make them a manageable size for manual handling. These elements have simple screwed connections, whereas the primary and secondary timbers use concealed hangers or galvanized flitch plates, depending on their load requirements. The bolt holes and flitch plates were plugged and packed to conceal the installation.

The millimetre precision of the glulam allowed for the development and construction of complex connections, enabling the assembly of roof pitches set to different angles. These connections formed the interface between the timber roof and the steel structure that supports them. The galvanised plate connections were developed by engineersHRW and specialist contractors Constructional Timber considering both the structural requirements and the ability for the large timber elements to be installed.

Installing the Roof “The timber-faced steel ring beam at the eaves was used to achieve depths that could be incorporated within the wall and provide an angled reveal that matched the primary rafters,” adds Greg Nordberg. “This element has higher loads than the rafters as it is shared by both roofs, and a timber ring-beam here would have appeared significantly out of scale. The steel ring was surveyed prior to erection of the timber pyramids resulting in a clean boundary of contractual responsibility.

“The roof pyramids were erected by supporting the upper ring-beams with scaffold and installing the four corner rafters by dropping the end of the timber beneath its final position and rotating it to ease the timber into place. The use of the scaffold afforded sufficient tolerance to position these elements and, once installed, the roof could then support its own weight while the remainder of the glulam was infilled.”

Andrew King, from Constructional Timber adds: “With the restricted site access all deliveries were arranged using rigid vehicles only, which was challenging when the hip-beams were nearly 11m long and weighing 1.2 tonnes. For the installation sequence it was key to fix the level of the lantern beams off the temporary loadbearing scaffold supplied by the main contractor. The lantern beams were levelled to the correct height before the twin hip-beams were craned into position. The members were all supplied fully protected and with their fire treatment applied so to reduce site time and potential for damage.”

Ensuring long-lasting harmony in the different timber finishes – spruce glulam structure, oak timber linings and joinery and oak engineered wood floors – was important. We were keen to control the aesthetic over time and were mindful that the softwood glulam would redden from sunlight exposure. We wanted to avoid the space adopting an orangey ‘sauna’ look and a strident contrast with the more muted hue of the aged oak finishes. For this, we worked closely with timber coatings’ company Renner to do accelerated ageing of the different glulam finishes in a lab, developing a white tinted fire-proofing finish that would remain UV-stable.