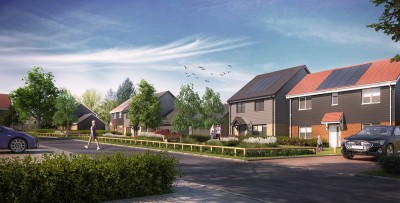 • All homes have an Energy Performance Certificate (EPC) rating well-above the highest category of ‘A’ *
• In the UK, only one percent of new builds are ‘A’ rated, while the average rating is ‘D’.
• Homes at Juniper Place will be the first in the UK to achieve World Bank-approved EDGE Advanced Certification, meaning they will be 40 percent more energy efficient than regulations currently require.

Etopia Homes, the housebuilding arm of Etopia Group, has begun work on a site in East Cambridgeshire to deliver 30 ‘net-zero’ homes.
Located in Wilburton, the new development, Juniper Place, is Etopia’s first in East Cambridgeshire, and will provide the local community with some of the UK’s most energy-efficient homes. The homes being delivered will have a mixed tenure between private market and affordable housing – will achieve an Energy Performance Certificate Rating (EPC) rating well-above the highest category of ‘A’. In the UK, only one percent of new builds are ‘A’ rated, while the average rating is ‘D’.

Backed by the Reuben Brothers Etopia Homes, one of five companies that sits within the Etopia Group, is the leading developer in the delivery of carbon net zero new homes using low-carbon technologies, sustainable building methods and materials, and smart devices that collect real time data on a home’s energy performance.

The homes at Juniper Place will also be the first in the UK to achieve an EDGE Advanced Certification, which requires each home to achieve at least a 40 percent saving on energy when compared to current building regulations, and at least a 20 percent saving in water and embodied carbon.
Before arriving on site, the components will be manufactured at Etopia Homes’ Cheshire factory, which is capable of delivering 2,000 factory-built homes a year using the company’s ‘hyper structurally insulated’ panelised system. Once complete, the panels will be delivered to Wilburton and installed to form a home’s ‘superstructure’ – a process that takes as little as three days.

Other key features of the homes include:
• Integrated low-carbon technologies – such as air source heat pumps and solar panels – which provide clean and efficient energy for residents while lowering their energy bills
• Mechanical Ventilation Heat Recovery (MHVR) system that is fitted with a filter that can remove 80-90 percent of certain allergens, as well as pollution. The technology enables Etopia to build homes in any location, such as along a busy city centre A road, while ensuring that residents will not be affected by higher local pollution levels
• The homes will include sensor technology that helps optimise a home’s energy use and regulate humidity levels. For example, if more people are in a home than usual, and therefore creating more heat and humidity, the technology will automatically adjust to ensure that energy is not being wasted
In addition, high levels of air tightness achieved by Etopia Homes’ unique panelling system also means less heat escapes – reducing heat loss by up to 50 percent when compared to a home built using traditional methods. This is important as, according to the National Grid, a fifth of the UK’s total carbon emissions are produced by heating buildings.

It is due to these efficiencies that the homes at Juniper Place will meet new and soon-to-be-introduced building regulations to be introduced later in 2021.
Under new regulations, new homes constructed from this year onwards will be expected to produce 31 percent lower carbon emissions in preparation for the 2025 Future Homes Standard.

By 2025, new homes will be required to be “zero carbon ready” by replacing fossil fuel heating systems, such as gas boilers, to be replaced by low-carbon heating solutions such as air source heat pumps and solar panels.

This means that the new homes will not require retrofitting when new building regulations come into force in 2025 as part of the Future Homes Standard. According to the Committee on Climate Change, an independent adviser to the Government, there are already 19 million homes in the UK that require some form of retrofitting to meet new standards.

Works at Juniper Place are expected to be completed in early 2022.

Joseph Daniels, CEO and founder at Etopia Group, says:
“As the U.K. economy continues on its transition to net-zero and energy prices rise at their fastest rate since the onset of the pandemic, there has never been a more urgent time to ramp up the delivery of energy-efficient housing, renewable energy and reduced energy costs.

“Green homes should be made readily available for all, including households on lower incomes. If the UK is to meet its legally-binding net zero targets, then it’s up to housebuilders to show that energy-efficient living is accessible and need not come at high prices. At Juniper Place we’ve set out to demonstrate this in practical terms.”