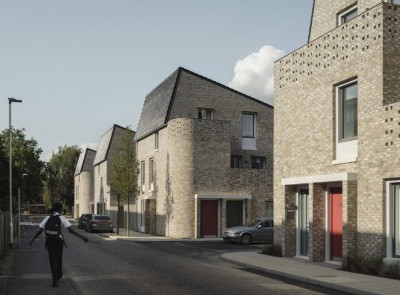 At the centre of Goldsmith Street is a highly insulated timber frame structure resulting in the UK’s largest social housing scheme to achieve Passivhaus certification.

The social housing development of 105 ultra-low energy homes for Norwich City Council, is the first social housing scheme to be shortlisted and win the coveted Stirling Prize. The Stirling Prize judges, chaired by Julia Barfield, praised Goldsmith Street as: “A modest masterpiece. It is high-quality architecture in its purest most environmentally and socially-conscious form.”

The seven terrace blocks are arranged in four rows and book-ended by three-storey flats, the design exploits angled sloping roofs to maximise daylight throughout the development and prioritises pedestrians over cars. The design seeks to provide sunny, light-filled homes with very low fuel bills of approximately £150 per year. This exemplary energy performance was achieved using a timber-based build approach that reduced the development’s embodied energy.

A key project member and supplier and installer of the timber frame was Cygnum Building Offsite. “We are immensely proud of the major role Cygnum Building Offsite played in this project,” said Cygnum Managing Director John Desmond. “We designed, manufactured and installed the highly insulated timber frame structures to a tight program and exceptionally high-performance standards. Our team were outstanding! Well done to architect Mikhail Riches and all involved.”

As well as achieving the rigorous Passivhaus standard, the delivery team was faced with significant additional challenges including a short lead time and a limited budget. Installing such a large number of houses with limited space and access required careful planning and sequencing. The offsite nature of timber frame meant this could be done long in advance of work commencing on site. A delivery schedule was agreed (and adhered to) at the outset and this allowed the main contractor to synchronise other trades with precision around Cygnum’s works. Houses were checked for airtightness on an ongoing basis and cellulose insulation blown in under pressure eliminated performance gap concerns and added to the environmental credentials of the scheme.

Good timber frame engineering also resulted in an economic design using less materials. In addition to this, in the building’s thermal envelope, less timber leaves more room for insulation hence the thickness of the walls and roof were kept as slim as possible. The Cygnum Passive system featured a twin-wall sheeted on both sides, with a membrane on the inside forming the airtight layer.  The build-up featured an 89mm stud, and a second 67mm stud, fully cellulose-insulated with an overall wall thickness of 399mm, which is designed to be thermal bridge free. The intermediate floors and roofs were factory assembled cassettes with the cellulose-insulated zone to the roof using 400mm engineered joists.

The walls are highly-insulated and the roofs are angled at 15 degrees, to ensure each terrace doesn’t block sunlight from the homes behind, while letterboxes are built into external porches, rather than the front doors, to reduce draughts. To achieve passive certification, materials, detail design and factory quality control standards had to be to the highest level. Four key factors had to be addressed: U-values, airtightness, thermal bridging, and interior surface temperatures.

RIBA President Alan Jones said: “Faced with a global climate emergency, the worst housing crisis for generations and crippling local authority cuts, Goldsmith Street is a beacon of hope. It is commended not just as a transformative social housing scheme and eco-development, but a pioneering exemplar for other local authorities to follow."