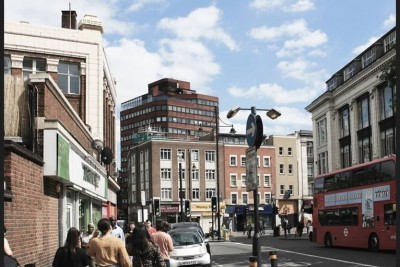 West Architecture has won planning permission to add a  200m² timber and glass 'crown' to the top of an 11-storey, 1980s tower in Brixton, south London

The temporary rooftop addition is part of a wider 1,564m² revamp of International House, which until early 2018 housed around 600 Lambeth Council staff. The 36-year-old tower was originally designed by George Finch and the council's own architects

The mixed-used proposals also include internal alterations to the block's 10th and 11th floors to create work, education, exhibition and dining spaces.

The building is currently home to numerous business and was recently declared the first Living Wage building, meaning every tenant as part of their rental agreement must pay at least the Living Wage to their employees and contractors.

According to West Architecture, the lightweight and 'restrained' rooftop pavilion will create a 'breathtaking room' with panoramic views across the capital that 'will not interfere or detract from its setting'.

Architect and practice founder Graham West said: 'We have made sure that this new addition to International House respects the architecture it inhabits, with a simple orthogonal pavilion nestled into the roofline.

'When using the space, visitors will be able to access a landmark building in Brixton and then encounter the wider city once they rise to the top of the building. We have always believed that the successful development of London is reliant on reusing buildings and bringing them back to life for future generations.'

Work is expected to start on site later this month.